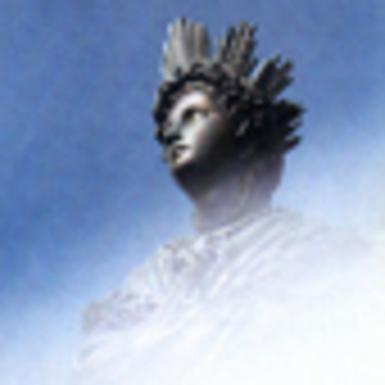 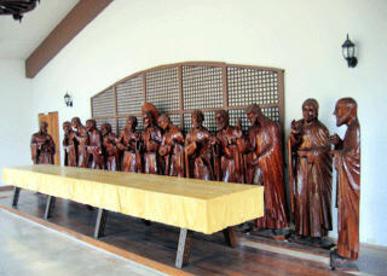 Brief History of the Shrine

In November 1941, three newly ordained La Salette priests  boarded the SS President Grant in San Francisco to sail to the La Salette Missionaries in Burma. On December 8, Pearl Harbor was bombed and America was at war with Japan. The passengers of the ship were ordered to disembark and sleep on the shore.

Manila was occupied by the Japanese who placed all foreigners under house arrest. The three priest: Joseph Descoteau, John Doherty and Fred Julien sought and found refuge with the Jesuits. In 1944, Fathers Descoteau and Julien were moved to Los Banos, a hill country 40 miles of Manila, where they joined other internees; two bishops, 243 priests, nuns and brothers plus 2000 Protestant Missionaries and their families. Father Doherty remained in Manila.

Having discovered the Japanese plan to execute the internees, General Douglas McArthur mapped out daring rescue. In early morning of February 23, 1945, while Japanese were doing their calisthenics, some 200 U.S. paratroopers dropped from the heavens and separated Japanese from their guns. As the first paratrooper touches the ground, the Filipino guirellas scouts hidden in the nearby mountain surrounded the camp and begun their attack.

"A fierce battle took place." said Father Julien. "Bullets flew over our heads. We all lay flat on the ground praying the rosary. I was convinced some of us would die. Trembling from head to foot and unable to control my head pounding on the ground, I promised Our Lady of La Salette to erect a shrine in her honor should she help me survive." Amphibian tanks broke through the fences and the internees were herded on even Japanese continued shelling from the hills. Miraculously, not even one internee was killed. The camp went up in flames.

Soon the three La Salettes were reunited and deported to the states where they petitioned the Seven Dollar Province to allow them to return to the Philippines. Back in Los Banos in 1944, Bishop Constance Jurgens invited Fathers Descoteau and Julien to come to Isabela, a province up north, to help when the war was over. A postulatum, therefore, petitioning for the Philippine mission and signed by the La Salette in Texas and Louisiana was presented in the Provincial Chapter in 1948. But the decision is to maintain Burma.

Henceforth, all ensuing correspondences were addressed to Father Elmeric Dubois,   the  Provincial  ofthe Immaculate Heart of Mary Province, eventually paving the way to acceptance of the Philippine Mission.

After seventeen years, Father Alphonse Dutil, the Superior General, allowed Father Julien to return to the Philippines. In 1962, he was FEATI University Chaplain in Manila and in 1964, Father Paul Douillard, MS, the Vice-Provincial told him: "You may go to Silang to fulfill your promise but we neither give you money nor help."

Sixteen hectares of land in Silang had been purchased in 1961. Here, Brothers and Armand Fredette and Andrew Mahen grew vegetables and fruit trees. They also raised chicken and pigs. Father Julien moved with the brothers and hired Maximo Luna to help plan the shrine.

Money had to be raised. A plant nursery was expensive way to generate funds. A rose grower became interested in project and donated 100 potted roses. From there, thousands were propagated. The sale of plants and flowers was brisk. Soon the income allowed the hiring of two more helpers.

​In 1965, Father Julien celebrated his 25th anniversary as a priest and visited the States.. During his six months visit, he was able to raise a decent amount for his projects in the shrine, from his anniversary gifts, rummage sales, card games and other ways and means that his friends and relatives did to help. This enabled Father Julien raised enough money to built a multipurpose, one-storey building. The building, consisted of a chapel, a gift shop, a storage room, Father's bedroom and cooperative store owned and managed by his employees.

The gift shop, on the other hand, had become popular with tourists, allowing the hiring of more employees for the many on-going projects.Two men from Manila were hired to build a life-size statue of Our Weeping Mother as part of the shrine of La Salette. Using holy pictures as guide, the men finished a beautiful statue on November 10, 1968. The novena to Mary, Queen of La Salette started on September 11.

In 1968, Father Julien borrowed the equivalent of $25,000.00 and purchased a large shipment of woodcarvings to be sold in the parishes in the States.  Realized sale of all the carvings was more than enough to pay the loan and still keep a profit of $27,000.00.

The exact measurement of the Shrine in La Salette, France were obtained and work began. Large pieces of granite were brought from the stone cutters in Manila to the site in Silang. Many hours were spent under the hot sun breaking the large chunks into smaller pieces. Marcelino Sicat, an excellent carpenter and mason built all the shrine walls and did the rest of the masonry.

​The blessing of the shrine took place on September 19, 1968. Over 500 people marched, sung and prayed. It was a day never forgotten. A 97-year old woman was given the honor of cutting the ribbon. The residents played their guitars and sung during the celebration.

It is now necessary to provide sleeping quarters for retreatants wishing to spend a few days. St. Joseph's Dormitory with sixteen bedrooms, four people to a room was constructed.

A second visit to the States to sell woodcarvings was made by Father Julien and Teodoro Samilin, an employee. The trip earned enough to enable to add a second storey to the multipurpose building. The expanded building now contained conference room, four bedrooms , a dining room and kitchen. With these facilities many more retreatants came. For a time, Father Loinel Lacasse and then Father Alphonse Larochelle preached the retreats.

The number of retreatants and tourist increased weekly. It was time to build a church and turn old chapel into a larger gift shop. The combined income from retreats, nursery, flowers and appeal letters sent to local and foreign benefactors made it possible to start the project.

Deeply interested in the shrine project from the beginning, Brother Armand Fredette was appointed treasurer of the shrine in 1979. Through his tireless efforts, he obtained farnitures and other materials from U.S. AID. Meantime, the Fredette family in the States raised thousands of dollars for the shrine.

Anton Kho, owner of ACF Construction Company and close friend of La Salettes, slightly modified the plan and assigned foreman to supervise the construction. All the labor was done by regular employees of La Salette. Even the Scholastic Brothers in those years contributed to digging the foundation.

The adobe ground took time, patience, and plenty of determination to carry on the work. The Church was finally blessed on September 19, 1977.

Today the facsimile is surrounded by beautiful gardens and a well-landscaped property which draws many people. Many also were the school groups, parish organizations, who, while on an excursion, would stop by to visit the Shrine and hear once more the message of Our Lady of La Salette.

Upon reaching the age of 70, Father Fred Julien returned to the United States on July 31, 1979 - seventeen years from the day he promised to build a Shrine of Our Lady of La Salette.

(After his Texan parochial ministry, Fr. Julien came back to stay till his twilight years. He is now resting in peace in the burial grounds of the La Salette Missionaries at the Shrine).

Image of the Our Lady of Missions

The bell tower of the Shrine as seen from the gate 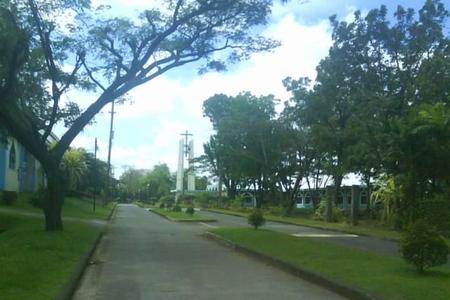 The Philippines is a rich haven for religious shrines.  Filipinos naturally express affinity to them.  They look to Shrines as their second homes and yearly look forward to visiting them as they would to close relations and friends.

Shrines take a special part in the culture of Filipinos who are by nature religious.  In the indigenous Filipino mind, God is not one who is far and separate from the mundane activities of man.

Neither God is to believed to be up there in some unreachable distant place.  God is present in the most common of places - in the mountains and rivers, in the rice fields and fishing grounds, in the trees and caves.  Human space is also God's space.  It is keeping with Divine Revelation that nature bespeaks of the presence of God.  That He should manifest Himself in some specific site at some specific moment is, to a Filipino's mind, as natural as the blowing of the wind and the dropping of the rain.  Shrines as places of God's manifestation has become part of Filipino religiosity.

La Salette Shrine is one of those places.

Through all these years, it has become a concourse to all sorts of people;  they come from varied cultural and socio-economic backgrounds.  They originate from the different regions bringing along with them different needs and intentions which entail a suitably oriented pastoral program.

Seen as the ideal for the fulfillment of Mary's call and of the Congregation's Charism, (La Salette is less known for physical healing than spiritual wholeness) sacramental ministry takes central focus, along with preaching and devotional activities.  Daily masses are offered.  A regular schedule of confession is kept.  This is one important aspect because majority of the pilgrims come for the purpose of experiencing pardon for their sins and therefore reconciling with God and men.  Hence, reconciliation is the major theme.

Counseling services and spiritual direction is considered to be important aspect of the pastoral care being rendered.  Pilgrims usually come to the Shrine with a heightened openness to God and their visits  become moments of grace.

Christian formation is given equal importance.  Spiritual retreats and recollections are frequenty held.  Leadership and human development seminars and workshops,  and religious instructions are regularly conducted.  It is  also a regular venue for Marriage Encounter Groups and Couples for Christ Movement and other family oriented retreats and seminars where two of our members are Chaplains.

Many more programs are constantly being designed and additional retreat facilities were constructed since then. The Shrine lately has been made famous by the unique natural theme park of the place:  the tree shaded facsimile of the Apparition of Our Lady of La Salette, the Rosary Hill surrounding a natural pond, the habitat for wild ducks, the vast green lawn where one can relive the Stations of the Cross and the Last Supper of the Lord Jesus.

In everything, it is to echo and fulfill the call of Mary:  "Well, my children, make this known to all my people."

Sanctuary of the Shrine Chapel 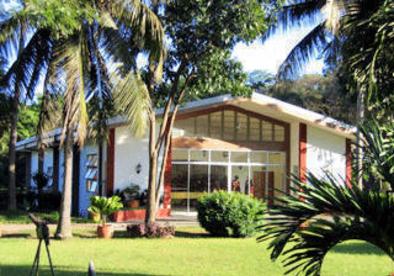 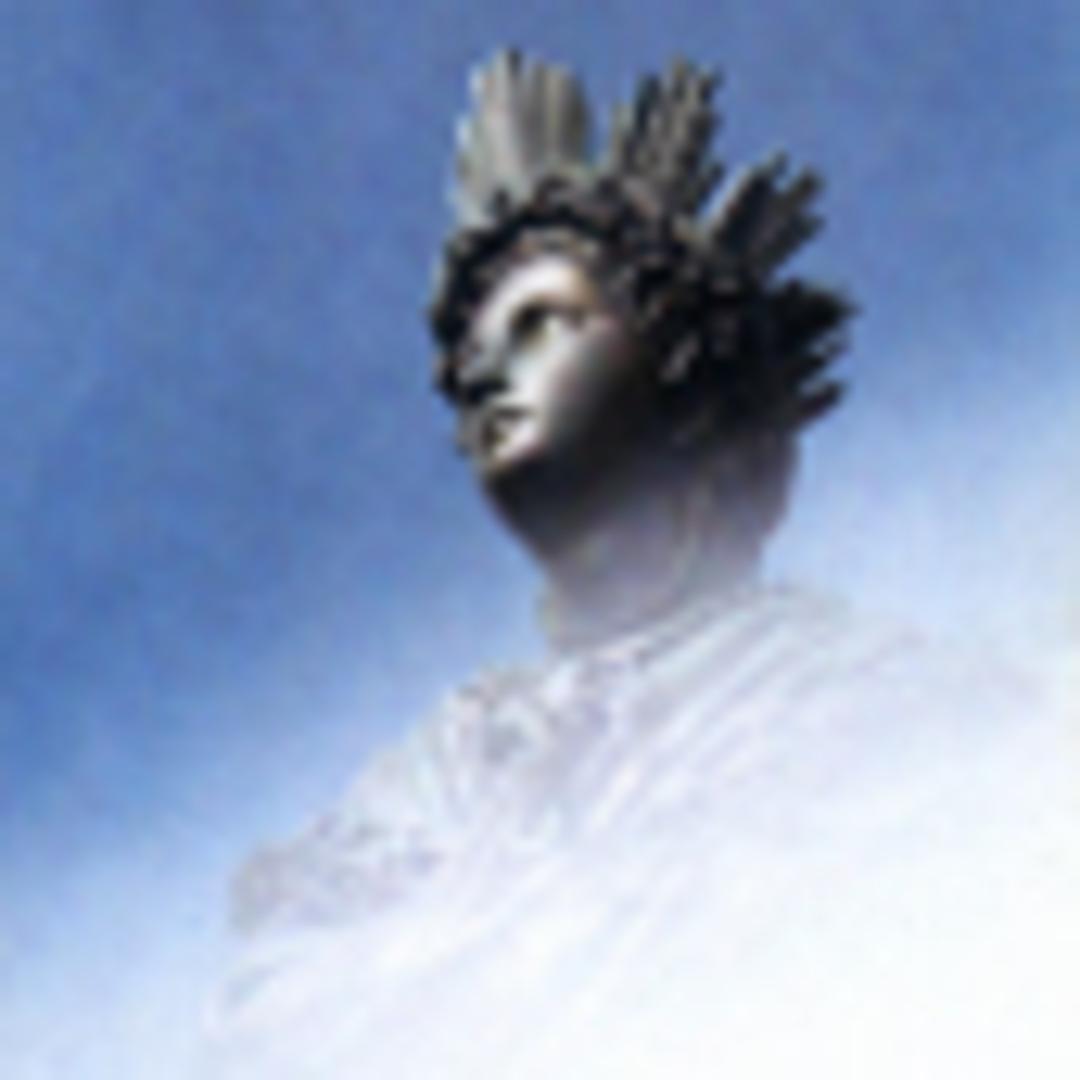 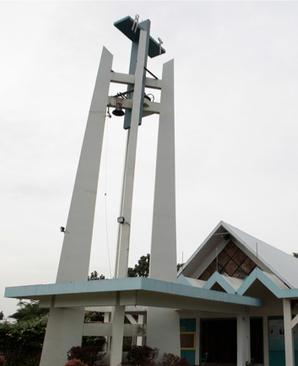 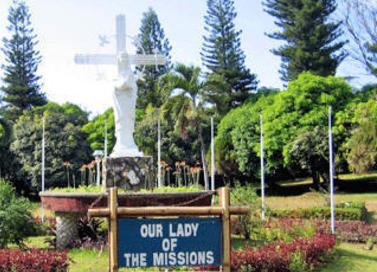 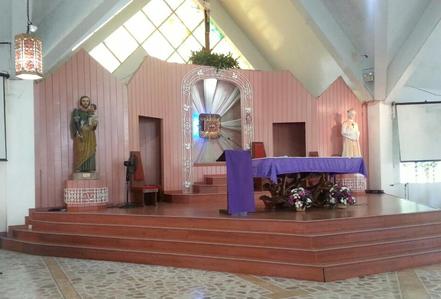 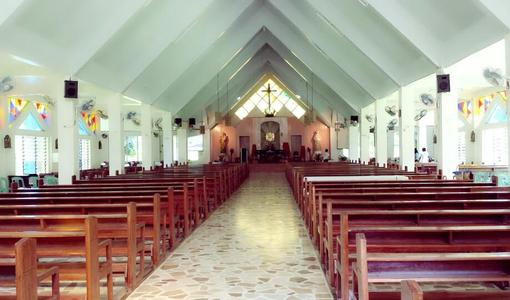 Interior of the Shrine Chapel

"Make this know to all

NATIONAL SHRINE OF OUR LADY OF LA SALETTE